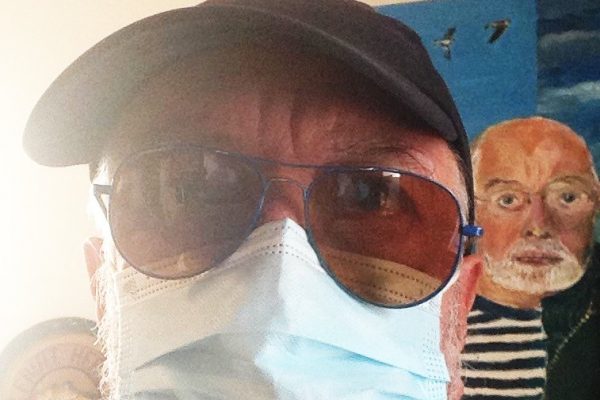 JUST to be clear, the misgivings I mentioned at the end of my last article were not about going on holiday with my two old friends, but about going anywhere at all beyond my house, my village and the beach where I swim most afternoons.

When lockdown was first imposed in France on March 12, the message from the government was clear; bars, restaurants, churches, mosques, schools, shops selling nonessential goods, sports fields, stadiums, beaches, cinemas and almost any other place where people might congregate were closed. We were all told to stay home, all the time. No end date was given, but for the officially “fragile’, a category into which I was thrust by reason of my age, it looked as if this might be forever.

There were some exceptions. People who supplied essential services carried permits to allow them to travel to and from work. The rest of us were sometimes allowed out, but only for one of a very small number of specific reasons, like taking individual exercise, attending court or essential shopping. We were limited both in terms of how far we could go (5kms) and for how long (one hour for shopping and half an hour for exercise) and had to carry a signed form giving our name and address, the reason for being away from home and the time at which we had left it.

This first period, which lasted all of what remained of March, all of April and half way through May, was very straight forward. Told to stay home or risk my own death and that of others, I stayed home. So did everyone else, judging by the way that my normally busy street fell silent, except for the seemingly amplified songs of birds.

Being retired, a lack of time to do anything I might want to do is not a big feature of my life. Nevertheless, like many other people, I made lists of all the things I was going to get round to and then lost them. Feeling that I owed it to posterity to chronicle the changes that I and the rest of the world were going through, I even began a kind of ‘plague diary.’ This lasted all of two or three days before I ran out of new ways to describe the absence of anything happening in my life.

In fact, one thing was happening. During the first few weeks of “Le confinement” my normally fairly solitary life was suddenly full of people. Some were strangers and none of them came knocking at my door, except in a virtual sense. If I had had anything important to do, it would have been impossible, given the hours that were suddenly taken up talking to people on Zoom, Messenger, Skype, Whatsapp, or even, with the more elderly and technologically challenged, on the old steam phone.

While it was nice to have prolonged contact with old friends and even some new ones, at times it was hard to escape the feeling that I was on a list somewhere of elderly vulnerable folk who needed to be checked up on frequently, solely to establish whether they were still alive.

Things began to change in mid-May sometime when restrictions on movement were eased a bit. Now you could travel as far as 50 kms without the previously required document, provided you didn’t socialise with any strangers and only very few of your family, when you reached your destination. I was delighted to find that my car still started and a few times just went “spinning around” in good old Falklands style, just to enjoy a change of scene.

Most important, as far as I was concerned was that now I could go to the beach. Previously a banned area, notices posted up by the authorities now described as a “dynamic beach”. This meant that solitary exercise like walking, jogging or swimming was allowed, but sun-bathing, picnicking, just sitting, or any group activity, was banned. Although tropical by Falklands standards, the Mediterranean was still a bit chilly at about 19C, but it was great to have the sea pretty much to myself most afternoons at first. Gradually restrictions on the use of the beach seemed to be forgotten as the weeks wore on, the weather and the sea got warmer and the French summer holidays started in July.

Now the official summer is over, but not before my beach at Sainte Marie la Mer made international headlines.

Just a day or two ago, the police responded to a request made by some prudish family and asked three topless female sunbathers to cover up. This, it has since been established, was totally out of order and unconstitutional. Now womens’ groups are up in arms about this challenge to their traditional right to risk sunburn on their more tender parts. I am confidently expecting that once the wind dies down enough to avoid sand-blasting any exposed flesh, the beach will be full of appropriately dressed protestors. The French love a good protest.

With the gradual easing of some restrictions, in France as in some other countries, we have entered a somewhat challenging period. On the one hand we are warned that the virus is still raging and a deadly second wave of infection will be our fault if we don’t continue to follow all the government’s guidelines. On the other hand, we are told that if we don’t start going out again to work, buy stuff or just to have a good time, the economy will die. Once again this will be our fault.

In effect, the government is now saying it’s up to us to steer our own path through this thicket of contradictions. We are now free to roam about at will within France and even to leave, if we can afford the flight and are prepared to risk being confined when we reach our destination. However, while being offered these large freedoms, in our daily lives we find more obvious constraints than before.

As is well known, the French are a nation of huggers and kissers, but now the majority greet each other by bumping elbows or fists. Kissing is in any case difficult because nearly everyone is wearing the kind of face mask which we used to mock Japanese tourists for. At the entrance of nearly every restaurant, café or bar, every outdoor market and even in a growing number of town centres, there are notices stating that the wearing of masks is compulsory.

Going into a café or restaurant, you are expected to use the hand sanitizer provided and to be masked. It’s easy to forget, but, as at the doors of shops and other places, members of staff with masks and visors are there to bar the door if you don’t comply. Consequently, the title of this piece, which roughly translates as “Oh shit, the mask!’ is probably now the most uttered phrase in France. Oddly enough, once you are sitting down at a table, you don’t need a mask, at least until you get up to go to the toilet or to pay the bill, ideally with a no-contact bank card. One has to wonder whether this is just a temporary situation, or part of the new normality.