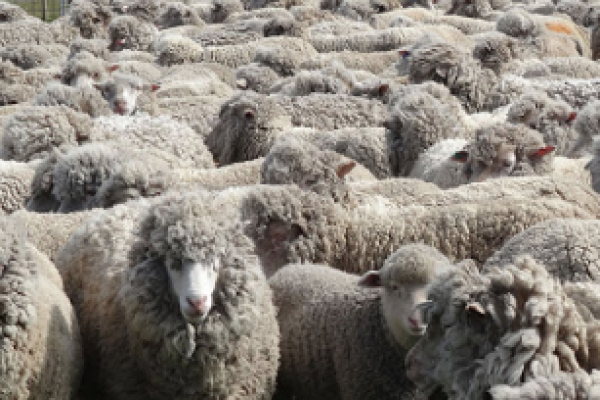 WOOL prices have crashed to 40-50% below levels of early 2019, leaving many Falklands wool growers concerned for their businesses.

Wool prices have been under pressure for much of the last 6-9 months with falls of 20-30% occurring during the period March 2019 to March 2020. The remaining crash was stimulated by the pandemic.

Director of Natural Resources Andrea Clausen has assured, however, that the Falkland Islands Government is working on “sector specific measures” to help businesses, including new measures to help farmers.

Mr Judd was also, “optimistic about the medium to longer term prospects for the sheep and wool industry.”

He said FLH was “committed to retaining staff and to growing the strength of the business into the future.”

Wool Agent Robert Hall of Falklands Woolgrowers told Penguin News there were, “significant financial implications upon Falklands businesses” for which the Falklands needed to prepare. But he also assured that the Falklands Government was looking at agricultural sector support and FWG had been assisting with information for the Department of Agriculture. (See further on for Mr Hall’s broad view of the situation).

Dr Clausen said on Tuesday that FIG was, “working on a range of measures as well as more detailed work on specific sector measures.”

She said the wool sector was one of those areas that was being looked at, “unfortunately, it’s not just wool prices that are the issue, the entire market is freezing up, so limited sales are also impacting businesses.”

She said last weekend FIG called every farmer in the Falklands, “in order to understand exactly where wool sales are and also to check in on everyone, as we were sure there would be a lot of concern out there.”

They asked farmers a number of questions and, “requested and received useful information from our wool agents.”

She said the work was aimed, “specifically at wool producers and the impact of declining prices and the slowing down of sales, on business cashflows. There will be a range of support mechanisms that already exist that we will re-promote and there will be some new. At the moment we are concentrating on the short-medium term issues, we will consider longer term issues at a later date.”

Coast Ridge Farm on West Falklands, owned by Keith and Nuala Knight, has been hit hard.

Mr Knight explained: “We had a total of 69 bales this season. We have only sold 11 and are awaiting payment, with 19 bales of wether wool tested but unsold.

Not only have wool prices dropped dramatically, but buyers aren’t even offering. We have 39 bales in Stanley untested because we can’t get wool tests to NZ, due to no flights. Self catering was our secondary income but as you know that is closed for the foreseeable future.”

Penguin News asked Mr Judd what steps FLH would be taking in the light of reduced income. He said FLH had been re-shaping expenditure for the current financial year with significant reductions in expenditure achieved.

He said, “Spending on some major items has been delayed indefinitely and further spending has been cancelled completely.”

FLH is reviewing the profitability of all of its business activities besides sheep and wool farming, such as tourism; horticulture; livestock freight and also high quality beef production.

Mr Judd said: “The Board of FLH will review involvement in such activities on a case by case basis and also consider the national interest in making decisions about whether or not to continue operations.”

He explained that FLH had already commenced detailed business planning for operations over the next several years.

Over recent years FLH had investment in farm plant and equipment; farming infrastructure; staff homes and farm sheds, so, “FLH  expects that significantly reduced expenditure will be required over the next few years in such areas.”

He added: “A very lean budget is imagined with the ambition being to seek a break even position for the organisation.”

Robert Hall of Falklands Woolgrowers gave Penguin News a broad view of the wool price slump saying: “This 2019/2020 season has seen substantially lower sterling wool prices since August 2019 as a result of reduced demand from China and the rest of the world.”

He explained that until about March 11, when the WHO raised Coronavirus to a Pandemic, Falkland Wool Grower’s wool sale volumes had however been similar to recent seasons, with prices comparing well with Australia’s AWEX, “albeit at this season’s lower levels.”

He said the challenging conditions “became unimaginably worse during March 2020 when Covid-19 forced closures across the fashion and textile retail sector, with the result that all fibre demand throughout the manufacturing chain from the high street back to the farm has abruptly stopped.  Mills across Europe are in extended lock-down.

“The Australian government has issued essential services status to the wool industry ensuring its ability to continue with the trade and movement of wool during the current crisis.  However it is very clear that this situation could change in an instant.  Last week the Australian Eastern Market Indicator fell 11.5%, with 97 cents lost on Tuesday and a further 58 cents on the Wednesday.”

The industry in New Zealand and South Africa is shut down, he said.  Manufacturers across UK and Europe are closing and all mills in Italy and Spain have locked down. Mr Hall said: “The few mills still working are currently processing existing stocks whilst they can.  None are currently buying wool; none are selling product, yet this is the time when manufacturers should normally be busy processing new orders for the next northern winter. Textile businesses and fashion retailers have shut-up shop around the world.”

He was clear that if this lack of trade and thus wool income continues for many months “there are significant financial implications upon Falklands businesses for which we need to prepare.  The possible blueprint for this situation was after the 1991 collapse of the Australian wool price reserve scheme and the subsequent price crash and Australian stockpile.  At that time FIG kindly worked with the industry, assisting with farm mortgages, helping cash flows and pumping capital into Camp.  Everyone is doing their very best to ameliorate the current situation, FIG are looking at agricultural sector support and FWG have been assisting with information for The Department of Agriculture.”

He said the world’s textile industry, “like the rest of the world, has entered uncharted territory as a result of Covid-19 with the short/medium term prospects poor, serious and very challenging.”