Funds for subsidised services to give way to port costs? 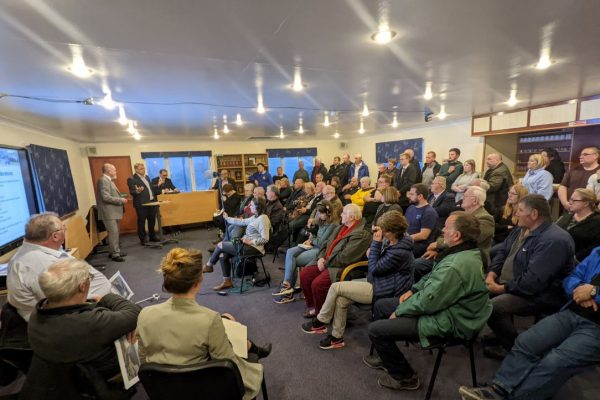 FUNDING for the government subsidised services and the capital programme will have to be considered “dispassionately” if the new port project is to go ahead, Financial Secretary Tim Waggott stated in a public meeting on August 22.

At the meeting Robert Millar, Senior Project Manager for the port project, said that the current stage in the port project is a “gateway” which provides “the officers, and the MLAs in ExCo, an opportunity to review where we are and decide whether or not we go forward, and if so on what terms we go forward.”
The decision, Mr Millar stated, is expected to come to Executive Council on September 27.

During the meeting the finances of the new port project were discussed, and it was revealed that the total cost of the project was now three to four times the original Rough Order of Magnitude (ROM) estimate costs from 2018, which were said to be between £50m and £70m – allowing a range of some £130m between the highest and lowest estimates of £150m and £280m [range of lowest ROM tripled, to highest ROM quadrupled].

Despite these increases in cost it was summarised at the meeting that some requirements of 2019 were no longer met.

These included a roll-on roll-off capability, which has been removed; a reduction to buildings, which are now down to “only those absolutely essential for port management and welfare”; changes to resupply pontoons; and reduction to quay size to a 300m north face, 90m south face berth, and width tapering from 50m on the west end to a 40m eastern berth – reduced from the 2019 requirement of a size of 400-600m by 60m width.

It was also noted in the meeting that some works have been transferred to FIG to be completed by the Public Works Department, such as “lay down areas and enabling works,” said Mr Millar.

He explained that “the tender price for construction inflation for 2022, in the spring of this year was forecast at 8.5% for a 12 month period. In that one quarter alone the global economy saw an 8.1% increase in diesel fuel prices.”

Mr Waggott added the war in Ukraine had had a significant impact also due to the fact that the proportion of imported construction materials sourced from countries affected by the war was over 1% of the total market.

It was raised by Mr Millar, when summarising the condition of the current port – FIPASS – that the option to prolong the life of FIPASS was investigated, where a cost of £5.8m would add only 3 years to its working life.

Mr Waggott summarised matters surrounding the attainment of an A+ Credit Rating from Standard & Poor (S&P).

He stated the basis of the rating was “our forecasts of where we are going and the amount of money we might be seeking to borrow.”

As such the credit rating was, Mr Waggott said at the public meeting, “ostensibly based on us peaking our debt at £60m.

“So if we went on to borrow more than £60m and we were struggling to pay it back because of other things” such as increased capital spending and operational spend, then prioritisation would need to take place.

“We can’t simply afford to do absolutely everything,” Mr Waggott stated, later referencing the “aspirational” 10-year capital programme, which “currently amounts to just shy of £400m.”
He also stated that MLAs had “difficult choices that they’re trying to square the circle on in terms of inequalities in society; our health and social care system; what we do with the education of the state and whether it’s fit for purpose for the future, and how we deliver education in camp as well.”

He added that infrastructure decisions such as the port, power station and the hospital all have budgetary implications.

Regarding prioritisation of funds Mr Waggott later said that “as part of the next set of budget principles government needs to give some really careful thought to those areas of the Falklands that it subsidises as well.

“There’s an awful lot of subsidy that goes into quite a number of services at various stages, and they have to be looked at almost dispassionately.

“This is considered about the value for money that they actually create and garner for society as a whole.”
It was noted that the reserves policy of government of keeping 2.5 times the annual operating expenditure in reserve, currently estimated at roughly £190m [excluding Island plan investments], may have to be reviewed to make the decision.

Speaking about the return on investment to the costs of the port Financial Secretary Tim Waggott said “if you reflect on the fact that 60% of our GDP is driven by one sector, it’s really important that we nurture and continue to look after those key stakeholders.”

On “other commercial models” which Mr Waggott said may be available, he said there was a “complex mix which goes on between user charges for utilisation of a facility and [how] the capital costs apply to them.”

He continued, “where we’ve not gone yet is how those user charges may flex” and said there are “aspirations for new business streams that we may be able to transact over a new facility.”

The option of a joint venture approach to the new port project was raised, to which Mr Waggott said “it’s an option that we possibly have to think about” but noted that in the private sector “the amount of money they seek in return for their investment is often greater than that of Government, and therefore delivering something jointly takes a long long time” and is a “difficult decision.”

If a decision were made not to go ahead with the port a non-exhaustive list of other options was displayed, which included a phased replacement of FIPASS; replacement with a new floating facility; re-entering negotiations on Mare Harbour; segregation of facilities and services; or re-examining the port as part of the Waterfront Master Plan.

Senior Project Manager for the Port Robert Millar said “whatever happens there will be engagement with yourselves, the key stakeholders, the industries that use it.”

He added that it’s key to “keep industries working sustainably, efficiently, effectively, profitably, and for the benefit of the islands – not for the next five years, but for the next 10, 20, 30, 50 years.”