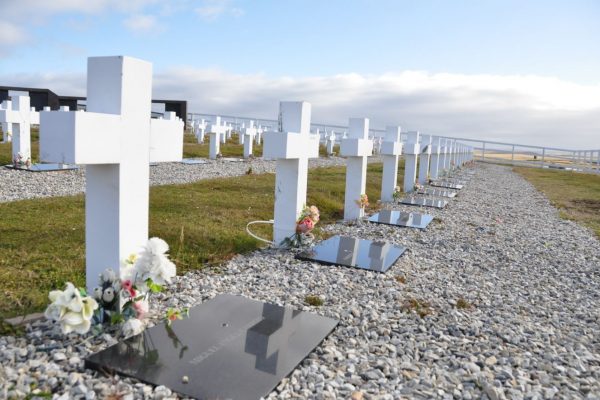 Today, two mandates were signed at the International Committee for the Red Cross (ICRC) Grand Salon in Geneva, in order to enable a new stage of the Humanitarian Project Plan to proceed. The plan, which began in 2017, has led to the DNA identification of 115 Argentine soldiers who died during the Falkland Islands War, and were previously buried in unnamed graves.

The first mandate is a joint decree between the UK and Argentina, with the second being a tripartite agreement between the Falkland Islands Government, UK Government and ICRC. Today’s ceremony follows an exchange of notes in September 2020 between British Ambassador to Argentina, Mark Kent, and Argentine Foreign Minister Felipe Solá.

Chair of the Legislative Assembly, MLA Ian Hansen, said: “From the very beginning of the project we have recognised and upheld our humanitarian obligations by helping to ensure the success of this work. Despite the obvious sensitivities, we have supported visits by the Families Commission to visit the newly-marked graves and pay their respects to loved ones. We will continue to provide our assistance in the months ahead, treating this next phase with the same level of dignity and sympathy as we have done over the past four years.”

Under the new agreements, the ICRC will again act as a neutral intermediary, and will focus on work to identify human remains buried in grave C.1.10 in the Argentine Cemetery at Darwin. The ICRC team is expected to return to the Falkland Islands in August 2021, if circumstances permit.