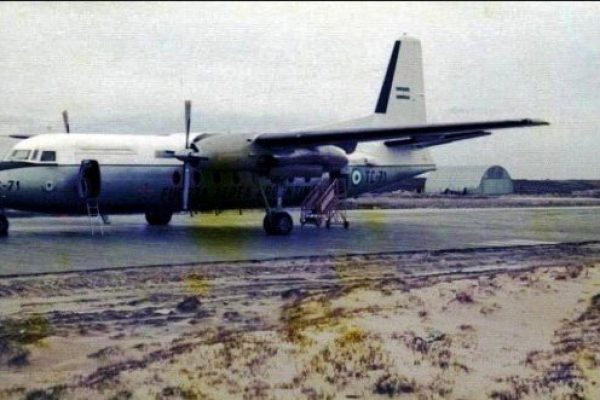 In the 50th anniversary year of the 1971 Communications Agreement between the Falkland Islands and Argentina, Penguin News spoke to a number of Falkland Islanders about their memories of that time (see Penguin News this week) among them former Radio Islands Broadcasting Station Manager Patrick Watts MBE in an exclusive article for Penguin News wrote of his thoughts and recollections. (Image: An F27 on the temporary Argentine airstrip).

WHEN in late 1970 the Falkland Islands Company (FIC) announced that they would be withdrawing the small freighter/passenger (50) carrying vessel RMS Darwin, which plied monthly between the Islands and Uruguay, it was anticipated by a vast majority of the population that the British Government would automatically, and as a commitment to the Colony, provide a similar type ship to continue the service.

The Darwin provided the only communication with the outside world, taking around 4 and half days, in good weather, to reach Montevideo, the Uruguayan capital, and 5 days or more if the winds were strong and the seas were rough. It brought eagerly awaited ‘Air Mail’ which would be flown from Britain and then languish in an office in Montevideo for several weeks until the ship arrived and then became ‘Sea Mail’ for the rest of the journey to the Falklands. The ship also brought fresh produce, vehicles and the occasional racehorse. Falklands residents returning home from holiday in Britain relied on the Darwin while Falklands children who attended the British school in Uruguay became regular passengers.

However, unknown to the Islanders, the British Government had no intention of funding an expensive replacement vessel and, despite Argentina’s long-standing sovereignty claim, approached the Government in Buenos Aires and suggested that they might like to provide an airlink between the Argentine capital and Stanley and so establish a presence in the Islands. Unbeknown to the Falklands population they also hinted that so popular would the service become that it would just be a matter of time before the Islanders would forget about their much-loved links with Uruguay, and that this would eventually lead to recognition and acceptance of Argentina’s sovereignty claim.

Two elected ‘Councillors’ (as they were known 50 years ago) Richard Hills and Lt. Colonel Richard Goss journeyed to Buenos Aires as part of the Foreign Office delegation and according to leaked reports they were locked in a room and given 30 minutes in which to either accept or reject the proposed Communications Agreement. They had no means of communicating with their colleagues back in the Falklands and they were harshly reminded by the leader of the Foreign Office delegation David Scott that should they reject the proposals then they would leave their constituents ‘high and dry’ and without any external communications whatsoever. The two unfortunate men had little option other than to accept the first stages of Argentine involvement in Falklands affairs which would continue for the next 11 years. It was not to be unexpected that forever after Councillors Hills and Goss were known locally as ‘the 2 dicks’.

In August 1971 the Communications Agreement was formally signed by representatives of the British and Argentine Governments.

Within the Falklands population there was a combination of anticipation, excitement and a little trepidation too at the thought of being able to take a 2 hours and 20 minutes flight from Stanley, on a 45-seat turbo-prop aircraft, operated by the state airlines Lineas Aeras Del Estado (LADE) to the city of Comodoro Rivadavia in the southern province of Chubut. Seats could be bought for as little as £15 (but it was not long before the price escalated at an alarming rate and become unaffordable for many people).

From Comodoro it was just a short 2 hours direct flight to the exotic city of Buenos Aires, known universally as the ‘Paris of South America’ and where most of the world’s major airlines offered flights to International destinations. Those who suffered seasickness welcomed the cessation of the 1,000 miles sea journey to Montevideo. The Communications Agreement also provided for Falklands children to attend, at no expense to their parents, British schools in Argentina, for their secondary education. Medical patients were afforded attention at the renowned ‘Hospital Britanico’ in Buenos Aires while after a period of 130 years of being carried by sea, air mail would be arriving weekly by air. Fresh fruit and vegetables would also be carried on the aircraft. Football mad Argentina would host the World Cup of 1978 and some fans were already making plans to attend the tournament. The writer and the then 18 year old Ian Hansen were the only 2 Islanders who actually made it to Buenos Aires. Others started out but found that the female companionship available in several bars in Comodoro Rivadavia to be far more enticing than football. Two attractive Argentine female teachers would be sent across to teach Spanish in Stanley’s schools. The Argentine state fuel company YPF was given a monopoly to provide all fuel in the Islands – cheaply at first of course.
A memorable football match between Stanley and the YPF team attracted the largest crowd ever to the Stanley soccer field and an Argentine cricket team toured the islands.

As a compromise all inhabitants of the Islands were issued with a ‘Certificado Provisorio’ (Provisional Certificate) which avoided the need for a British passport to be shown upon entering Argentina. Locally it was known as the ‘white card’ presumably because all the relevant details were printed on a white piece of card.

However, it all seemed just a little too illusive and a few sceptics were asking why was Argentina prepared to indulge in considerable extravagance when there was no conceivable way that any British Government would ever enter into discussions over the sovereignty of the Islands. Such a suggestion could not ever be contemplated!

But by 1977 alarm bells were beginning to ring as the Argentine Military Junta, which had overthrown the civilian Government of President Isabel Peron, widow of the famous General Juan Peron, started demanding a return for their investment in the Falklands. Had not the British Foreign Office promised that the naive Islanders would by now be totally receptive of the Argentine generosity and be prepared to accept some form of acceptance of the long-standing sovereignty claim?

Also it was presumed that the younger members of the community were supposed, by now, to be speaking fluent Spanish while a vast majority of the population would have enjoyed the many delights which Buenos Aires offered. A vast majority of the Islands population suddenly realized that they had been lured into a trap which was going to be difficult to extract themselves from. A Labour Foreign Officer Minister Ted Rowlands arrived in the Falklands and emphatically warned members of the Legislative Council that unless they agreed to talks on sovereignty being initiated then it was likely that LADE would withdraw their air link and the British Government was not prepared to come to the aid of the ever-diminishing Islands population.

The beleaguered Councillors were faced with a practical dilemma and opinions were divided on the best way forward. The late Robin Pitaluga OBE felt that although sovereignty would be discussed it did not have to be given away. However others responded by saying that once sovereignty was put on the table the Argentines would understandably believe that Britain had at least recognized their claim and it was just a matter of time before a formal handover would take place.

Minister Rowlands again visited the Falklands and exerted yet more pressure on the Councillors to relax their stance and finally in 1980 Minister Nicholas Ridley (Cons.) outlined the lease-back arrangement which would recognize Argentine sovereignty over the Islands although Britain would continue to administer the archipelago for a certain number of years, yet to be decided, as Argentina had not been formally approached as to whether they would accept such a proposition. Some spoke of 5 years while others mentioned 50. The Foreign Office plan gained momentum as Islanders were in a ‘no win’ situation. Asked what would happen should the Argentines decide to ‘walk in’ sometime in the future, Ridley, added further fear, by strongly advising that Britain no longer had the Military capability or resources to mount any type of recovery of the Falklands.

But for the intervention of Councillor Adrian Monk the ‘lease back’ proposal may have obtained enough support to encourage the British Government to approach the Argentines and seek their cooperation with the plan. Mr. Monk, who lived at San Carlos, and fearing censorship, secretly recorded a message on a cassette which he sent for broadcast to the Radio Station in Stanley. He urged the inhabitants not to accept any form of lease-back and insisted that in the event of any aggression by Argentina that the British Government had a duty to defend the Falklands in the future. His words changed the mood and attitude of the population and within a few days it was obvious that lease-back was a dead duck in the water.

In late 1981 General Leopoldo Galtieri over-threw General Roberto Viola and assumed the Presidency of Argentina, and in April 1982 Argentine Forces invaded the Falklands. Despite advice to the contrary Prime Minister Margaret Thatcher was adamant that ‘the Islanders be rescued’ and the rest is history, as the saying goes. For sure that without her determination and resolve and the sheer professionalism and courage of the British Forces the Falklands would have remained under Argentine jurisdiction for evermore.
Accordingly it is understandable that those people who resided in the Islands in 1971, and who still live here today, remember how a seemingly innocent air link between Argentina and the Falklands developed, some 6 years later, into the discussion of sovereignty and the subsequent invasion of the Islands, are they are now naturally wary of any type of cooperation with Argentina in terms of regular and direct air or sea communications. It is unofficially reported that the present Argentine Government would like to re-establish the LADE air service – but at what eventual cost to the ever-increasing and affluent Islands population?

For sure the Argentines would expect a natural progression which would eventually lead to closer cooperation and eventual acceptance of their sovereignty claim. 50 years ago the Islanders were duped by the British Foreign Office into believing that Argentina was acting as a kindly neighbour with no ulterior motives. It is inconceivable to believe that our present MLAs or, indeed, that a vast majority of the population would be foolish enough to be deceived again in 2021 or in succeeding years.