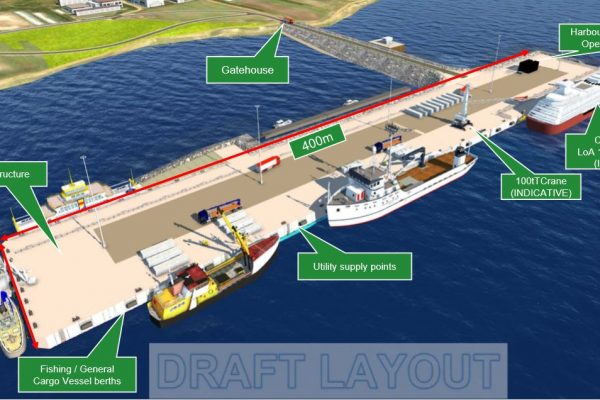 “BIG benefits” and enhanced health and safety aspects were key messages at a public meeting held on Wednesday night about the planned new port for Stanley Harbour.

At the meeting a team of four from BAM Nuttall and Royal Haskoning gave a presentation to members of the public in the Town Hall.

The team opened by explaining FIG’s brief, and the main aims for the port before answering a number of questions from the public at the well-attended gathering.

The team said Stanley Harbour had been decided upon as the most “cost-effective.”

Mr Potter said they had been briefed that a 400m x 60m platform was required with office space for a Harbour Master and Port Operator. The aim was the Western end would berth cruise vessels during the season and an area to fence off passengers from normal operations such as fishing and cargo. There would be utility supply points on the dock for water and fuel to bunker vessels and the structure would have to take a 100-tonne crane at any location.

“It is a solid structure … so you will have to get used to the tide going up and down against your quay.”

He said at the east end of the port there would be a berth for small boats and a roro for the Concordia Bay ferry plus an access gangway on the south side for small vessels.

The main access causeway will have a two-lane carriageway and a footway access. The FIPASS structure will be completely removed.

Meetings have been undertaken with Stanley Growers to talk about access around the Market Garden and Seaman’s Mission.

Ms Mansfield assured the meeting that the coastal footpath would be maintained, “there will be a crossing point across the new road to maintain that facility…”

She said regarding the port itself “the name of the game is improved port efficiency and making sure it delivers value and that we get the cargo and transhipment in the most efficient way possible.”

She outlined how the team had met members of the fishing, shipping, agriculture and tourism sector before describing what she referred to as the “big benefits” of the port. She said they wanted to include a degree of future proofing. “Some of it will be what I call loose fit so that is to make sure that especially the berthing phase is flexible so as many vessels as possible can use those facilities in different slots.”

She said other aims were to limit the amount of downtime in the harbour “to make sure the cargo gets out to the community as quickly as possible; and then exports are also dealt with as efficiently as possible.”

She said they were also concerned that the construction and design programme were as short as possible. “You already have a life-expired asset so trying to make sure you are not limping on for as long as possible is a really principle aim,” in order to avoid future heavy bills from maintenance of the old dock.

Improved cargo capacity and improved health and safety was also an aim, she emphasised.

On the subject of tourism she referred to improved “income generation” and “maximising the spend” within the Falkland Islands.

Ms Mansfield spoke of biosecurity, limiting oil spillage and reducing sewage into the harbour, saying all of that would “come as part of the revisions to the port.”

Some of the key health and safety benefits she said would be that the deck would be a solid structure so would be easier to de-ice and the turning of vehicles safer as instability would be less, due to it not being a floating pontoon. Also, there would be fewerhigh-risk maintenance activities such as diving and working at height. There would also be efficiencies in relation to power and lighting.

In terms of the time-line this was divided into three, 1A, 1B and the construction phase. The first (1A) will involve stakeholder engagement, ground investigations and preparing management plans leading to the concept design, and then the next (1B) will involve the design being finalisd and the procurement phase  – logisitics and plant. The final phase construction, speaks for itself. The team said 70 workers will be brought in to build the port. A number of questions were asked by the public including the question of where would they obtain the large amounts of rock required to build the port. Ms McGowan said meetings had already started with PWD on this question and it might also be a case that BAM would bring in additional plant a joint venture would be set up to produce more rock if necessary.

Regarding the placement of the port  in front of Tussac House, Mr Potter said there was an argument for the elderly being able to watch the world go by.