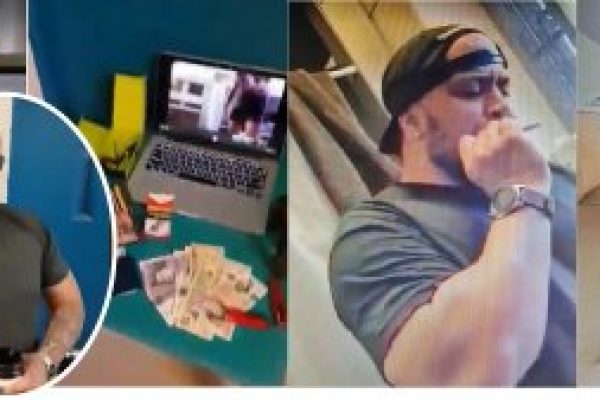 TWO videos taken by former inmates of the Stanley prison blatantly celebrate the easy time they had while inside.
An external review is to be conducted on the prison service, it has been confirmed.

The videos which came into the possession of Penguin News this week show them apparently smoking weed, drinking what they describe as “prison hooch” and boasting about their access to various luxuries.
The luxuries include a smart phone which prisoners would not normally be allowed, it has been established.
They also pan around to show a laptop, a tattoo gun, close to £200 in bank notes, two televisions and two PS4s.
The prisoners show obvious glee at their good fortune and clearly intend to send the videos to friends.
The men involved are the three New Zealand fishermen found guilty of violent disorder charges in August 2020. Sonny Ball, Samuel Goldsworthy and Chassy Duncan were crew members of San Aspiring.
The prisoners are in high spirits in one video with rap music in the background: “we’ve got our mixture there – jail hooch – we’ve got cash, ciggies, phones, laptops, we’ve got cups, pre-workouts, the tat gun, vapes… we’ve got the 48 inch, we’ve got one PlayStation there, we’ve got the PS4 there, the TV on the wall…”
In the second video where they are apparently smoking weed, the air is thick with smoke and the music is loud.

Penguin News contacted the Chief of Police via the Falkland Islands Government Communications & Media Officer and asked, had the Prison Service become aware prisoners had allegedly obtained access to illegal substances?
Penguin News also asked where might they have obtained it and if the whole situation was linked with a member of staff being suspended in past months (the staff member is now back at work).
Penguin News also asked if it was standard for prisoners to be in possession of mobile phones and so much technology while in prison.

The response Penguin News received was as follows:
“The videos received were drawn to the attention of the Falkland Islands Government in May 2021 through the whistleblowing procedure.
“A full investigation was conducted in relation to all matters raised by the whistleblower, including all issues arising from the content of the videos which were filmed in 2020/21, and this matter is now closed.
“Her Majesty’s Prison Service in the Falklands has learned from this matter, and operates in accordance with the required standards and international good practice.
“An external independent review on Her Majesty’s Prison Service in the Falklands will be conducted later this year by UK government officials.”

The three men were handed custodial sentences of 14 months 12 months and 8 months after Mr Ball violently attacked a person in Deanos Bar. Mr Goldsworthy attacked several other people in the pub, including a woman crouched on the floor covering her head. He also punched someone trying to protect her. Mr Duncan also attacked another group of friends – he was holding a glass.