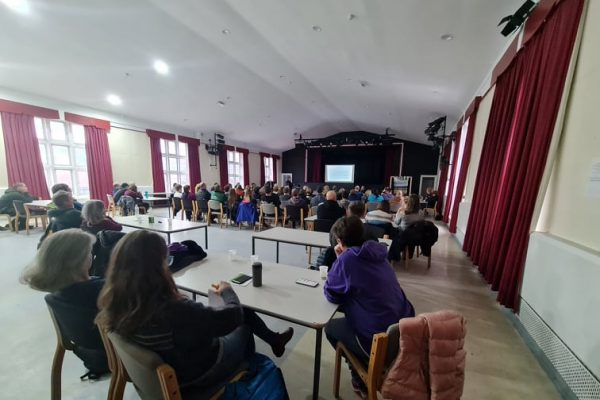 The FIMCo update led by FIMCo Chair Neil Judd on Tuesday included a presentation at which he laid out some grave concerns for the company.

Mr Judd explained that losses had incurred each year and had accumulated year on year and there was a lack of security over long-term funding. He said there was increased reliance on an overdraft to support the business and pressure on an overdraft cap of £1.5 million. Mr Judd explained that problems had been increased by Brexit and Covid.
It wasn’t all doom and gloom though. During his talk he paid tribute to the work of the team of the season at FIMCo making special mention of Nigel Leach. He said FIMCo had achieved “better than budget this year.”

The last of these models drew interest from Goose Green Manager Keith Alazia who told Penguin News: “I believe if they adjust to a system where they kill from October to May/June with less (or no) staff coming in from overseas, employing more local full time staff or overseas staff on long term local contracts, they can keep the loss down to a level where the MLAs will continue to support it financially.”

Speaking to Penguin News midweek, Mr Judd confirmed: “Farmers are after security about FIMCo. They need timely decisions about models of operation. When can that happen, is what the Board of FIMCo are saying. Everyone needs confidence that the best model of operation is good enough for the Falkland Islands Government and the MLAs to support long term so that is the brutal point of where we are right now.”

He added: “FIMCo given the nature of the entity is going to struggle to ever make a profit so it is a case of, what level of loss? What level of support is too much? So FIMCo is doing its work on its financial projections, saying that’s what it is, is that good enough? And if FIMCo or the Board fails then get rid of the Board! Or if staff fails then that has consequences as well we all know that; we all live under those terms.”

He said: “Farmers were interested to know that that’s just coming in from an overdraft and that continues to grow and grow and grow until it reaches crisis point and that was where it was getting to last year – the accumulated use of overdraft to support the business. That’s sustainable in one year but when it starts to grow towards that £1.5 million overdraft cap you’ve got options – you can say ‘can we make it £2 million can we make it £3 million and as a board that’s just not acceptable – and that’s the kind of challenge that’s in front of everyone.”

He said farmers needed reassurance that FIMCo would get government support “so they can then plan their businesses, they can be creative about trying to work a bit earlier or a bit later – so they were the models of operation – going super sharp and short for three months or longer for six months or trying to go longer again for eight or nine months. And farmers were comfortable – not all of them but the majority of them – to imagine that supplying wethers off the board a couple of weeks after shearing in November and December was great. And many people were saying March and April not bad either.”

Farmer and FIMCo Supplier Kev Marsh of Harps Farm told Penguin News he was deeply concerned with the situation following the knock-on effects of Covid-19: “Although around 25,000 mutton were processed under what was initially a non-starter season, there is massive apprehension to what the coming years hold for us as producers. Where in the past farmers have been asked to provide product to meet supply demand, which involves years of forward planning, we are faced with the reality that there is now little market to take those animals at profitable prices, and peaked in local sales.”

He said there was, “a general feeling of disappointment; many farms have worked extremely hard in breeding a beef product that is no less than world class and have developed a significant reliance on mutton/lamb income.
“Already we have some producers decreasing or completely pulling out of beef production as there’s a feeling of suspense to what the future holds.

“With, what I am told, only about 30-40% of FIMCo turnover going to farms, the future of the business will be felt throughout the community and so I can only hope there is support for FIMCo in these hard times.”