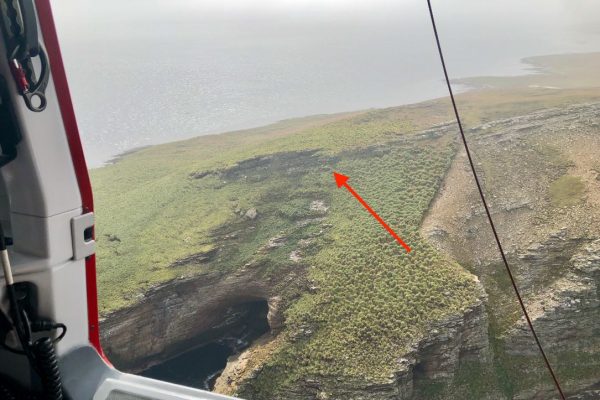 A lovely holiday with her son and daughter-in-law almost turned to disaster for Falkland Islander Judy White (71) this week.

Judy, who had gone to visit her son Alan White and wife Jacqui on beautiful West Point Island, had decided on Tuesday to take a walk while her family and visitors Richard and Marlene Short were out for the day, Jacqui told Penguin News.

Judy (now named Nana Bear Grylls by her grandson Oliver) headed “out towards the airstrip and around the coast,” she told everyone later, but on the way encountered some lively wildlife. Firstly a Jonny Rook caused her consternation by bumping her head from behind and stealing her hat and then she decided to move up the hill a little to avoid a “clap match” between male and female sealions.

By 4pm she was lost in the extremely high tussac grass and while moving through the tussac a bog collapsed and Judy fell on to a ledge – there she lay for some time surrounded by noisy albatross.

Judy told Penguin News: “I was unable to move my legs so I did my best to keep warm. I put my scarf around my face and breathed down my front and a poly bag on my head and my hands down my sleeves. I picked some tussac and ate the insides like you do for moisture and a bit of food. One mistake I made was to put old tussac over me which was damp. I could feel hypothermia kicking in. I was just tingling. But the noise of the old Mollymauk clacking kept me awake. I told her to shut up the noise but it was like she was saying ‘Come on Judy we can do this’.” (She wasn’t always helpful though and pooped on Judy’s head when she came into land once.)
Judy found the long night hard: “I never thought I would see any of my family again and I spoke to God all of the time.”

She fought for her life though; waving her lit Ipad into the air when the helicopter was close. At the point when the helicopter finally saw her she had no idea if it had. She waved her scarf with her tired arms without hope until finally, “I saw a tiny arm wave back.”

Within what felt like moments the crewman winched down to the ground wrapped his arms around her and winched her back up into the helicopter: “I call them my flying angels,” she said tearfully.

To return to the rescue story: around 5pm the night before Alan and Jacqui, Richard and Marlene had arrived back at the house and were increasingly worried at the non-appearance of Judy. They set off searching for her but had turned up absolutely nothing. By 7.45pm it was decided it was time to call the police. A Search and Rescue helicopter eventually arrived but to make matters worse a thick blanket of fog had descended. It set off searching the north coast as instructed. Unfortunately, the cloud cover was at 200ft the heli’ was at about 150ft and Judy was at about 500ft.

Rob McGill on Carcass placed Seaquest at their disposal, crewed by Mike McRae snr and Nikki Summers. She said however just as the search parties were organised and about to begin their search the cloud cover lifted and the SAR informed them that Judy had been found and was “coming in for a brew.”

Judy was found 500ft, above the West End Cave, near Cape Terrible at West Point’s northern tip. She was dehydrated and bruised but recovering well.
Alan said: “I can’t thank everyone enough for giving their time and support. It was the very best of Falklands spirit.”