Conservation in the Falklands: New Lease of Life for Middle Island 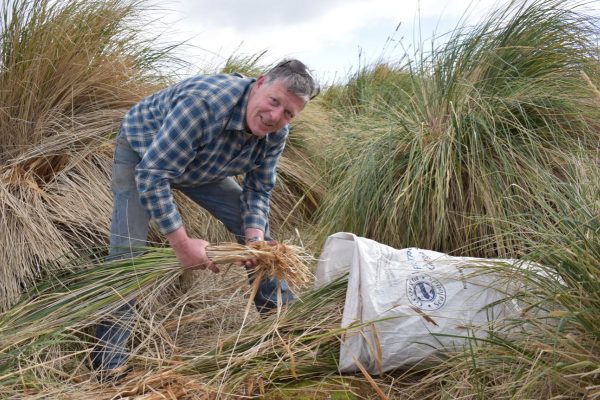 A JOINT effort by Falklands Conservation, Georgia Seafoods and BFSAI Conservation has made strides in carbon offsetting in a major tussac planting push on Middle Island, Choiseul Sound.

The initiative was first put forward by Georgia Seafoods in a drive by the company to help offset the operational carbon footprint of their fishing vessels. After contacting Falklands Conservation, the group identified Middle Island as a high priority location for tussac planting and put into process planning two volunteer trips in 2020.

Middle Island, located in Choiseul Sound across from Lively Island and Walker Creek, was targeted for planting due to its high levels of erosion and lack of recovery following a fire in the 1960s.

The BFSAI Conservation group undertook some tussac planting in 2019 and now with the joint efforts of BFSAI, Falklands Conservation and Georgia Seafoods on August 11 and from August 24 to September 27, a total of 5.4 hectares has been replanted with an estimated 12,605 new bluegrass and tussac plants.

Joost Pompert, lead organiser of the trip and General Manager of Georgia Seafoods, said that the company hoped that “this project will help prevent degradation on Middle Island and drive forward carbon capture methods”, commenting that it had been, “a great step forward and collaborative effort,” for tussac habitat restoration.

For four days, volunteers made the hour-long journey to Mare Harbour and were shipped to Green Island, a nearby tussac-covered island owned by Sally Poncet, to spend two hours pulling 60 bags worth of tillers from existing bogs.

The groups then boated to Middle Island over the afternoons to dig and plant the tillers they had collected.

Speaking to some of the volunteers, who ranged from residents to military personnel and UK visitors, there was an immense sense of achievement, cheerfulness, and enthusiasm despite the physically challenging task undertaken.

Wing Commander Guy Wood, who joined the trip on Sunday to witness the progress being made, was very impressed with the project and commented that he would like to see more military involvement and support in collaboration with local organisations.

Tussac plants have long been a key interest for conservation efforts in the Falkland Islands due to their carbon offsetting properties and habitat restoration abilities.

On the surface, tussac provides a sheltered home for a wide range of animals including sea lions, magellanic penguins, the rarer tussac bird and Cobb’s wren. Some even spotted a short-eared owl living amongst the grass on Green Island.

Meanwhile, under the towering bogs, tussac is an important retainer of moisture for the traditionally dry Falklands soil and its properties in restoring and preserving peatlands make it a crucial source for carbon capture, helping combat climate change.

Replanting such islands as Middle is key for the Falkland Islands, Sally Poncet said, as currently only 1% of the Falklands’ 778 islands are considered intact tussac habitats.

Not only will this be significant for Falklands’ sustainability and wildlife conservation but will help bolster the archipelago’s environmental image for the post-Covid tourism industry and could also provide a valuable economic resource for the Islands, as revealed in Falkland Conservation’s carbon offsetting report published earlier this month.

The organisers would like to thank everyone who made the trip possible, notably Sulivan Shipping for ferrying the volunteers to and from the islands, Sally Poncet for offering up Green Island for tussac pulling, and the hard-working volunteers whose dedication made the trip such a success.
“It’s an example to me and hopefully others of what can be achieved and what we should strive for,” said Falklands Conservation’s Habitat Restoration Project Officer, Dr Frin Ross.