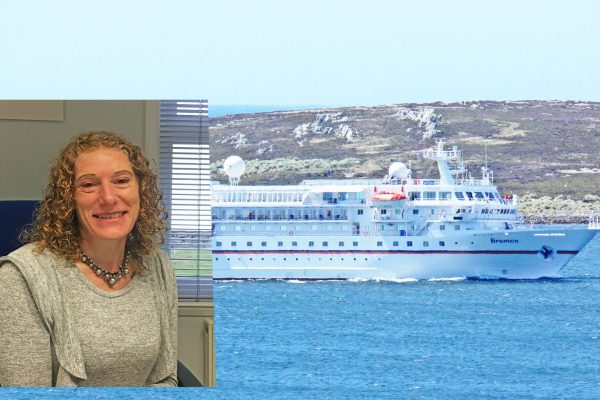 THE tourism industry “understandably were growing quite agitated with the uncertainty,” Chair of the Falkland Islands Tourist Board Sally Ellis (see inset image) told Penguin News. However news from government this week that tourism restrictions were likely until the end of  the year will, “allow businesses to plan how and if they wish to operate over the coming season,” she added.

Mrs Ellis said: “While not good news, I don’t think the announcement was that unexpected. I feel we had been gradually tempered to expect the end of the year as the likely scenario.”

In a press release this week Government confirmed that quarantine requirements and restrictions on visitor permits are likely to remain in place until the end of the year.

Nevertheless government said that the matter will be subject to regular review: on a monthly basis for visitor permits and every 42 days  for quarantine requirements, as is required by the relevant regulations.

Government also confirmed that in October it will consider whether the restrictions need to be extended into 2021.

The announcement comes amid calls for clarity from the tourist industry.

In the press release, the government noted that the UN World Tourism Organisation has predicted an 80% drop in global tourist arrivals in 2020.

MLA Mark Pollard, who holds the portfolio for tourism, said, “unless something dramatically changes soon, which is not likely, it is highly likely that the next tourist season in the Falkland Islands will not be able to rely on international visitors.

“There are impacts that FIG can try to manage, and a huge amount of work is going into development of support schemes, loans and grants to help the industry, and looking at ways we can encourage domestic tourism this season. This is an area where we can all help each other, and I hope that the community will take the opportunity to enjoy local holidays this summer.

“I know those who rely on tourism are very concerned; specific details on support packages will be developed for consideration by ExCo over the next two weeks, and more specific information on the measures we are developing will be coming very soon.”

Mrs Ellis who also spoke on behalf of travel specialists  International Tours and Travel (ITT) told Penguin News the announcement meant, “ITT can advise our international leisure visitors that they will definitely need to delay their travel …there was still a handful of bookings holding out for a more positive outcome …and we can move forward to some degree.”

In terms of the tourism industry season she felt the industry could at least begin to plan, “how and if they wish to operate.”

“For some, a big push on domestic tourism and adapting how they operate on a more economic basis (less staff, a reduced product) will enable them to weather the storm; others will probably opt to use the season to do renovations and improvements and we are looking at options on how we can encourage and facilitate that so we are in better than ever shape for the 2021/22 season and beyond.”

Mrs Ellis said however: “For others it will be very bleak, and we must not lose sight of the fact that there are many businesses island wide, including Stanley, which are affected, and for which a fix is not very easy at all; retail outlets and eateries spring to mind.”

She said: “Businesses are going to have to be creative to capitalise on things like school holidays and events which will attract people to them.”

She said alongside that FITB “will also review their marketing efforts and see what initiatives we can create in house to support the industry but still ensure we remain on the international sales books for the future. With reliance on domestic tourism we are conscious that with such a small population the cake needs to be pretty big for each person’s slice to count.  And of course all parties including IAATO (International Association of Antarctic Operators) are still considering whether an expedition cruise season is at all salvageable – whilst not generating vast amounts of income it plays an enormous role from a partnership perspective.”

Speaking from the point of view of International Tours and Travel Mrs Ellis aid: “The existing support schemes have worked well for ITT, and our team has been keeping morale up with regular interaction over social media or brief visits to the office. As for everyone, the effect will run longer than this season, but we are confident that FIG see the important role of commercial flights to the islands economy and social welfare, and so the conversations with LATAM are ongoing, and we look forward to seeing them back here when it is possible.”

General Manager Malvina House Hotel Carl Stroud speaking to Penguin News said: “This decision is what we expected at this time from FIG and we welcome the clarity it will bring.”

He said: “Now this decision has been made we can plan for the next 6-12 months and make changes when required to reflect the current business environment.

The thought the idea of promoting domestic tourism was, “a great idea which we totally support for Camp locations.”

He added: “We will keep running offers to attract the local and MPC trade to the hotel and Darwin House.”

Mr Stroud said: “I feel it is crucial for the Islands both socially and economically that the infrastructure of the Tourism sector is kept going during these challenging times.”

On Wednesday ExCo approved the extension of the employment/self-employment, job retention, unemployment subsidy and direct grant schemes which were introduced in response to the pandemic.

They were due to end on July 31 but have now been extended until September 30.

A further review of the duration of the schemes will take place no later than September 23.

The schemes have been extended to support economic sectors which will continue to feel the impacts of the pandemic. In addition the extension will support continuing demand for the schemes where KEMH instructs symptomatic individuals and their households to isolate.

LATAM has confirmed that the Punta Arenas-Santiago route will remain suspended until at least  November 7, 2020, and the situation will be reviewed near that date.

The Sao Paolo route suspension is suspended until at least the end of September 2020, and it has been announced that the situation will be reviewed nearer the end of that period.