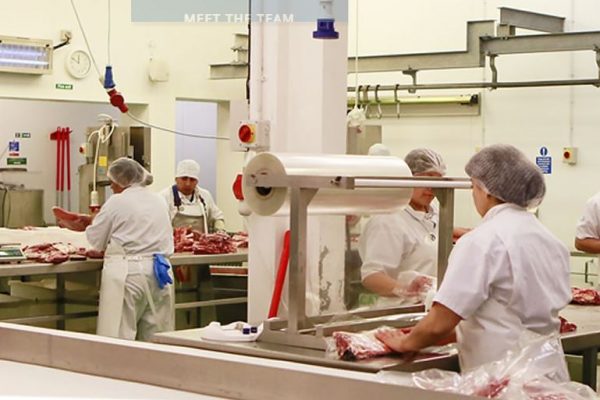 Local farmers, who supply stock for the Falkland Islands Meat Company (FIMCo), suffered a blow this week when it was announced in a press statement, released on Facebook, that the company would not employ any overseas meat workers this summer.

The company normally processes around 50,000 animals using overseas workers, but as a result of not employing the workers FIMCo anticipates it will process only 25,000 to 30,000 sheep. This may lead to hundreds of older sheep requiring slaughtering on farms if the farm land will not support the additional stock.

The Falkland Islands Government has confirmed to Penguin News that the Department of Agriculture is working with FIMCo “to mitigate impacts of a reduced export season, such as possible financial support, and will be engaging with the farming community as these proposals develop.”

Speaking to Penguin News West Farmer Keith Knight expressed his unhappiness at the manner in which the company chose to announce the measures: “I’m pretty pi**ed off that we found out on social media, don’t think it would have taken much to email suppliers beforehand.”

A sentiment echoed by farmer Dot Gould who said “We had no prior warning at all … I was really unhappy with how it was announced and handled.”

Asked about the impact on Mr Knight’s farm (Coast Ridge Farm) he said: “We have 200 mutton (about 20% of our wether flock) already shorn, drafted and on good ground quite a way from settlement fattening, also approximately 50 old season lamb.”

He added: “I have suggested in the past, asking if farmers could help at FIMCo. I would go for a week or two between shearing and in March and learn/improve a new skill, work in a team, supplement income with wool prices being low. But as has been said there’s been no consultation with suppliers.

“I’m not sure what we’ll do with our sheep now, but we will miss the income from that for sure. Larger farms like FLH will unlikely be able to ‘run’ the cull sheep for another season.”

One farmer online summed up  current farming morale as: “We have been poked in the eye with wool prices, but to be also kicked in the nuts by the meat industry, the eyes don’t stop watering.”

In the press release the reasons given were, “the onset of the second wave of Covid-19 across the world, growing disruption to international connectivity – in particular the airbridge – and the potential impact of Brexit on sheep meat prices.”

The press released added: “FIMCo will continue to process sheep, lambs and beef for local supply and is investigating the possibility of a ‘100 sheep or equivalent per day’ operation by supplementing the team with local staff as necessary; planning has already begun to allow a smooth transition to this way of working.”

Penguin News interviewed Chair of FIMCo Neil Judd for more detail who said the situation had been “accumulating since March.”

He said there had been, “increased costs with getting last year’s team away and uncertainty over prices,” so FIMCo had already been impacted over the last 12 months.

He said the FIMCo Board then had to look at the complications of flying the 34-strong team in from South Africa and Chile and the accompanying problems of requirements for visas, “that don’t exist,” through South America and through Brazil or Chile; visas with time constraints, and there were health checks, delays, hotel costs and quarantine. They also anticipated there could be problems getting the team home again.

He spoke of the impact of Brexit on lamb prices, commenting it was, “no secret a 10% fall in UK lamb and mutton prices was £200,000 pounds to the business of FIMCo, 20% was £400,000, 25% was being talked about as half a million. So, it’s trying to understand those risks from a business context … it’s not one issue, but a compilation of things just building up.”

While he said he knew people would say the company, “knew about Brexit,” he pointed out that everything about Brexit was an “unknown,” and then suddenly you had the “second wave of Covid” thrown into the middle of it.

He added: “And what if you have 34 people here on this journey and somebody has COVID once they are here, and there are insurance costs involved… So we’ve had that discussion with everyone and the Board recommended that, given that financial risk to the business, it did not proceed with bringing in overseas staff. We discussed that openly with FIG and MLAs.”

How many sheep does FIMCO hope to process, asked Penguin News.

“And I’m not going to pretend that I know what every farm is going to do. It’s traumatic … but hopefully we can minimise that necessity. The DoA is certainly starting to look at what they can do working with farmers, when they need it to help movement between farms, increasing some numbers on some farms where there is capacity.”

Asked if they had tried to get workers from UK, he said the Board had considered this but it was far too expensive.

When Penguin News contacted the Falkland Islands Government for further comment on the situation a response noted: “The decision was the recommendation of the FIMCo Board and was supported by MLAs and FIG. The decision followed a comprehensive review of the increased threats to the export season, including COVID-19, Brexit and global meat prices. Different options were also explored, such as having a partial season or extended season, and these discussions took place with both FIG and MLAs. Ultimately it was decided that the impact of all of these risks meant it would be untenable to continue as normal. Just as with wool and tourism, FIG will continue to work with FIMCo and other parties to mitigate the financial and farming impacts of this decision and to support businesses and business owners over the coming months.

“DoA is working with FIMCo to investigate options to mitigate impacts of a reduced export season, such as possible financial support, and will be engaging with the farming community as these proposals develop. For example, in the past, the Falkland Islands has carried considerably more livestock. As such it is possible that some farms may seek to increase numbers over the coming season. The current circumstances may present an opportunity for this to occur. There may also be potential to increase the throughput of Sand Bay abattoir above the stated 100 sheep equivalents per day if additional local staff can be secured. In addition it is possible that the abattoir could operate in ‘local worker’ mode for an extended period into late autumn/early winter as long as conditions allow.

“DoA is also available to provide advice to farmers and to support local efforts for farms to work together.”

MA Ian Hansen was also reassuring, he said: “MLAs had tasked the Department of Agriculture to contact farmers to find out how much they think they will lose and then we’ll see if we can package together some sort of compensation. But that’s ongoing and that’s really all I can say about that at the moment.”